Over the past year, billions of people around the world have relied heavily on internet connectivity to stay in touch with family and friends, learn online, work from home, and gain vital pandemic information. coronavirus.

Yet during 2020, 29 countries intentionally shut down or slowed down their internet communications at least 155 times, according to a new report released by Access now, a nonprofit digital rights group.

“We are extremely concerned about the way in which government authorities are using Internet shutdowns as a systematized tool to suppress democratic expression, even in the midst of a global pandemic,” said Raman Jit Singh Chima, senior international adviser and Asia-Pacific Policy Director at Access Now.

Indian authorities shut down the internet 109 times during 2020, mostly in Indian-administered Kashmir, which accounted for almost 90% of all internet shutdowns in India last year.

From January 2020 to February this year, the internet in Indian administered Kashmir was restricted to 2G, making life very difficult for many students in the state who had been moved to distance learning at the aftermath of COVID-19. 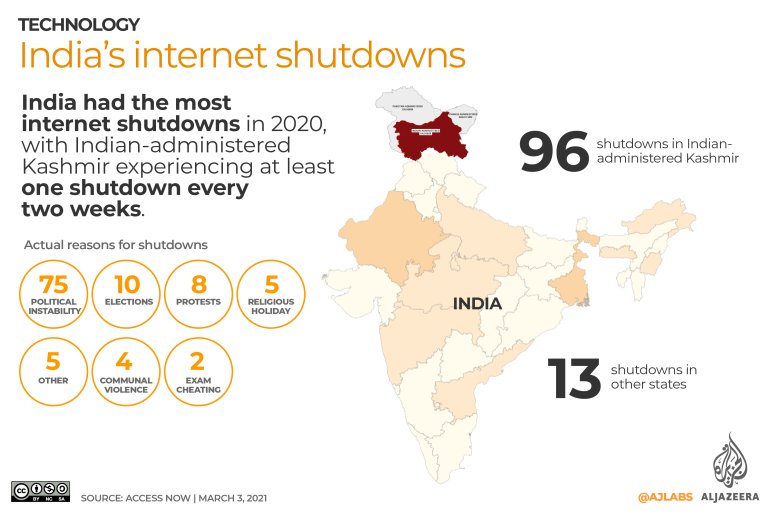 “We weren’t able to attend our online classes regularly,” said Bazillah Ayoub, 24, a student at the Model Institute of Engineering and Technology in Jammu.

Internet shutdowns in Indian-administered Kashmir are rife, with authorities citing precautionary measures as the main justification.

“The closures are used to suppress voices of dissent,” said young activist Kanwal Singh, 30. “We have been a state in conflict for 70 years.

Last year, the Indian Supreme Court ordered a review of internet shutdowns in Kashmir, ruling they were unconstitutional and violated India’s telecommunications rules.

“No government or authority is doing charity by restoring 4G services,” Singh said. “When the government restored 4G services, everyone started celebrating, but the point is, it’s not charity. It is our right and that of all, because it is guaranteed by the Indian constitution. “

Besides India, the governments of Myanmar, Pakistan, Bangladesh, Kyrgyzstan and Vietnam also blocked internet access in 2020.

Myanmar imposed the longest shutdown on record, which continued from 2019 to 2020 and through early February this year in Rakhine and Chin states.

As mass protests continue in the country, internet services remain precarious, despite the restoration of full internet access by authorities in Rakhine and Chin after a military coup last month.

In Bangladesh, Rohingya refugee camps were cut off from broadband internet access for 415 days. The Rohingya Students Network said people living in camps were unable to access vital health information during COVID-19 due to internet strangulation.

In Belarusian elections in August 2020, the government blocked social media channels, including WhatsApp, Telegram, Viber, and Twitter, as well as VPNs and Tor browsers.

Despite this, the demonstrators took to the streets to challenge the presidential victory of Alexander Lukashenko. As a result, the government imposed a complete internet shutdown from the night of August 9 to 12, 2020.

Belarusian journalist Hanna Liubakova, who covered the protests in Belarus, told Al Jazeera: “It was very difficult to verify the information and verify the facts because we received a lot of user-generated content.”

“Telegram chains became very important for citizens because it was the only platform that worked a little at least,” Liubakova said. “It has become the main source of information for so many people and the trend is continuing now.”

An increased number of Internet shutdowns have been deployed in conflict zones. During last year’s war between Azerbaijan and Armenia because of the Nagorno-Karabakh region, Azerbaijan has shut down social media and communication with citizens for six weeks. The government said this was done to prevent the Armenian provocation.

The country with the most Internet shutdowns in the Middle East in 2020 was Yemen, a country mired in armed conflict and humanitarian crisis. These closures have worsened the situation, making it very difficult to access information and communication – both for Yemenis and for international organizations trying to work in the country.

In January 2020, 80% of Internet capacity was cut in Yemen following reports of sabotage of fiber optic cables by Houthi rebels.

Jordan experienced three nationwide shutdowns in 2020. The government restricted Facebook Live during a protest by a teachers’ union in July and August 2020. The Ministry of Education has also blocked communication apps such as Telegram, WhatsApp and Facebook during national exams.

Other Middle Eastern countries that have shut down the internet are Turkey, Syria, Iraq, Iran, Egypt, and Algeria.

In Ethiopia, 100 million people have been plunged into a complete media blackout for two weeks following protests after the murder of an Oromo musician, Haacaaluu Hundeessaa.

In Kenya, at least two internet outages were reported in 2020 after the destruction of two telecommunications towers in Mandera County by the Somali armed group al-Shabab.

Internet shutdowns have also occurred in Venezuela, Ecuador and Cuba.

What are the reasons for Internet shutdowns?

The real reasons for the closures are due to political instability, elections, protests, community violence, information control and cheating on exams.

Seven countries, including India, Guinea, Belarus, Burundi, Kyrgyzstan, Tanzania and Togo, shut down the internet during an election period in 2020.